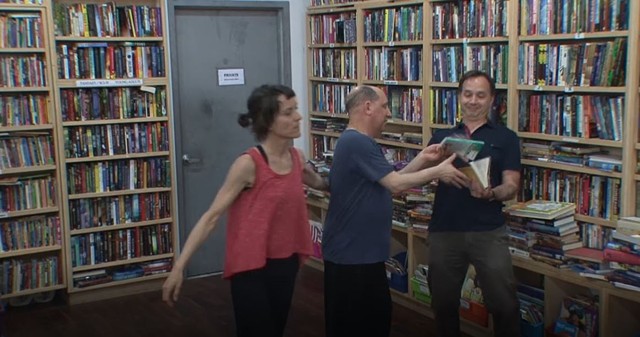 “On May 9th P.S. Bookshop hosted David Appel's Off the Shelf. Working with David has been an exciting adventure for us. Introducing dance and movement in the most unique of spaces—a bookstore—has brought amazing insight into how the space can be transformed and interpreted by another artist. For patrons and artists alike Off the Shelf was a one of a kind experience. P.S. Bookshop looks forward to hosting David again at the store in the near future.”

“I was fortunate to watch multiple 15 minute sets of Off the Shelf, and was caught up in the individual life each set took on. The wonderfully articulate dancers (Appel and Stanley) and exceptional actor (Chase) combined words and movement in ways that variously brought out warmth, satire, gravity, and humor. Amidst the intimate space of a used-book store, somehow it felt like my tactile browsing of titles opened me up to comfortably and curiously experience the performances at such close range. I'd love to see this project again!”

“I was absolutely taken with David Appel’s new bookstore project! The spontaneous interplay of dance with passages read from books pulled randomly off the shelf was potent, layered with nuance and associative meaning, and thoroughly entertaining! David, Darla, and Eric responded to the chance combinations of word and movement with the sensitivity, confidence, and wit of master improvisers.”

“I first encountered the dancer and performer David Appel at the back of a bookstore in Brooklyn. Here there was an intriguing improvised stage – a wooden floor, enclosed by the books and shelves. It seemed almost natural to find David there - an enigmatic presence, drawing the curious observer toward him. Later, I learned he chose this place for his collaborative Off The Shelf project precisely because of its allure, its intimacy, and because of the possibilities the contents of those books held. Off The Shelf is an improvised performance of so many chance encounters. The chance that the viewer wanders through the labyrinth to find this ephemeral instance. The chance of coincidence between the words of the book and physicality of both spoken word and movement. The chance of accord and discord between the three performers (David, Darla Stanley, and Eric Chase) as they navigate their way through both physical and fictive space. What is poignant about Off The Shelf is not just its beauty, wit and poetry, it is also its simple humanity. Because, like life itself, the reading resides in the meaning and connections the viewer makes between seemingly random acts of chance.”